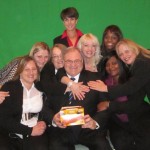 When I was in Connecticut  for the inaugural Home & Small Business Network event, I began a brand new 90 Day Plan.

My mentor Diane Hochman has stated on more than one occasion that if one will knuckle down and do THREE consecutive, back to back 90 Day Plans, your business would gain such momentum that it would carry you for years. (You would still have to sustain it, of course, but it’s sort of like push-starting a car … the hardest part is getting it moving … especially in heels.)

Such is the value of compounded consistency, as anyone who has completed a 30 day Blogging challenge can attest.

So on the 20th November 2010, in my quiet little hotel room, still buzzing with the group energy and flushed with karaoke success in the evening, I stood in front of the mirror and Committed to doing Three 90 day plans, one right after the other, culminating in September 2011.

I felt rather daft talking out loud to my reflected self in knickers and bra, but I Knew that if I didn’t do it Right Then, I would regret it.

And while I had some idea as to the outcome I was seeking, I was more focused on my overall Intentions rather than specific goals.

Basically what it amounted to was that I was going to treat my business as a JOB.

And Diane had promised me (actually everyone in the room as well) that if we did this – consistently, day in and day out – we would absolutely and categorically see our businesses Explode (metaphorically speaking)  on or around Day 45.

Ok I admit I was a bit skeptical about that ~ and Diane’s a great mentor in that she allows you to be skeptical and doubt her ~ so long as you try it anyway.

I think she just secretly adores it when you go back and admit she was right.

Which I have done. On numerous occasions. Because she usually is. *sigh*

So I went to work.

And dahlings, Fireworks are happening!    (Four days late, but I had some snowdays!)

Traffic is up; income is up; and people are calling every day.

But the biggest, jaw-dropping, holy-smokes change has been in ME!

Slowly, incrementally, without really noticing, I have morphed into a goddess who has a home business, as opposed to a domestic goddess who dabbles online.

A transition that was almost imperceptible until a few days ago, when the realization hit me so hard I had to sit down and have some tea!

So, scrumptious ones, if you’re determined to make 2011 your Breakout Year, there’s just a few things to do :-

And if you’d like some help, hand-holding, butt-kicking, or just want to stop struggling to make your home biz pay, give me a call or connect with me here in the comments box and we can chat.

Dear Hearts, I guarantee you’ll be utterly amazed at what lies in store for you just one 90 Day Plan away!