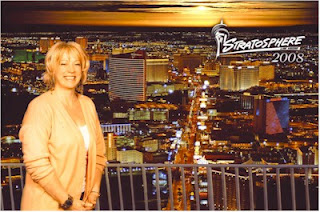 Wow, what an amazing thing the Internet is! Isn’t it awesome that I can sit here in my cozy livingroom and make a journal entry that the whole world can see and comment on?

As you can see from the photo attached, I have just got back from Las Vegas. This picture was the only cheesy touristy thing I did, besides losing $15.00 into the penny slots! I was there for a conference and training for my home-based candle company and I had an amazing time. There were so many different facets to the experience that I’ll probably take a few days to write them all down. There’s nothing like mixing with selfmade millionaires to make you realize that you could be one of them. More on the conference and making money later …

But first, let me introduce myself.

My name is Jacqueline Gates, usually known as Jacqui. I have been married to the man I call HusbandMuffin since 1982, and we have a daughter, and a son. Until May 1998 we lived in Port Elizabeth, South Africa. This is also the birthplace of Nelson Mandela and, after he came to power in 1994, the attempts by the new government to correct the wrongs of the past made life a lot less certain for the white minority. Crime was escalating, education standards dropping, and job security practically nil. So my husband and I decided to search for greener pastures. We didn’t really care where we went, we were just looking for more security and greater opportunities for our kids, who were 9 and 11 years old at the time.

HusbandMuffin posted his resume on an international employment website, and we were amazed when we were contacted within a few weeks. In December 1997 we were interviewed by one of the recruiters, and by May 1998 we had sold up a five-bedroomed home down to eight suitcases (yes, just 8!) and arrived in Minnesota. The only person we knew was the lady who was to be HM’s new boss, and we had never even visited the US. It was an adventure to say the least! And for this tropical blossom that had never experienced temperatures below 35F, that first Minnesota winter was a huge shock! I very quickly learned to pay attention to the wind-chill readings, and just because the sun’s shining, doesn’t mean you can go out without a coat!

But what an adventure! We have never regretted it for a moment, and we are focused on creating our piece of the American Dream. Truly this is the land of Opportunity, and finally after 10 years of searching and a few wrong turns, I have found the perfect opportunity for me to do that.

After nine long winters in Minnesota, we decided that we had had enough of dealing with the snow and the hassles that it brings, and looked to relocate to warmer climes. I had just read The Secret and watched the dvd everyday and I was determined to find the perfect house, and to have Malcolm and me be able to work from home. We created a vision board and focussed on what we wanted to see manifest in our lives. The Law of Attraction is an amazing thing. Within six months, everything I visualized came true. I am one very happy lady

and now having experienced my first Georgia winter, I’m even happier. I am grateful everyday for highs in the 50s and for snow that just looks pretty for a day or two and then disappears!

Finally, I’d like to share my favorite quote:
“It’s a funny thing about life, if you refuse to accept anything but the very best, you very often get it.” Somerset Maugham

So, to those new to my blog, Hello and welcome. I’m pleased to meet you and hope that you’ll post a comment so that we can get to know each other.

Till next time, wishing you a Bountiful and Beautiful Day
Jacqui