On the other side of Resistance and Procrastination and not-feeling-like-it, is nothing less than everything you’ve ever wanted.

“Like a magnetized needle floating on a surface of oil, Resistance will unfailingly point to true North – meaning that calling or action it most wants to stop us from doing.

Rule of thumb: The more important a coall or action is to our soul’s evolution, the more Resistance we will feel toward pursuing it.” ~ Steven Pressfield, The War of Art

I have to admit, I wrestled a bit with this. 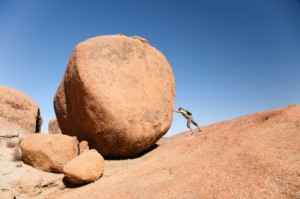 The idea of using Resistance, even (gasp) welcoming it, seemed in direct contradiction to everything I know about the Law of Attraction.

I mean, how does that view of Resistance align with alignment?

What happened to ‘going with the flow’ and ‘everything becomes easy when you’re doing what you’re meant to do’?

And if it (whatever it might be) really is what I want, why is there Resistance at all?

I’ve realized it’s not my Best Self that’s feeling this resistance.

The one who’s resisting is the woman I am now.

The one I want to change.

My current self doesn’t do yoga in the morning without fail, even when she goes to bed promising herself she will.

My current self eats too much sugar and hates (certain bits of) her body.

On the other side of Resistance is my Best Self.

That woman does yoga daily, eats well and loves herself unconditionally.

But it’s not just what she does.

That is a woman with a yoga practice.

That is a woman with a growing coaching clientele and a burgeoning speaking career.

That is a woman who writes her blog posts, cooks dinner, moves the hearts of strangers.

Not because she must, or should.

But because that’s what a woman like her does.

(Do you get that subtle distinction, dahling?)

On the other side of my Resistance is that woman.

Each time I showed up, put up and did the work, I conquered Resistance and became that woman.

Every morning that I laid out my yoga mat at the foot of my bed, and breathed into the first sun salutation, I became that woman.

With each vegetarian-dinner-success, each bit of dusting done before it was needed, each household chore reframed, I became that woman.

As I delved and dove into my coaching training, honing my skills and clarifying mission, message and mindset, I became that woman.

As I guided, prodded, mirrored and moved my coaching clients into their most luscious lives, I became that woman.

Until, as I realized over my coffee this morning …

The woman I am now is that woman.

Of course, this doesn’t mean that there’ll be no more Resistance.

I expect I’ll probably wage this battle again and again as I move through “what is” into “what’s possible”, but oh, how different it is now.

The woman I am now is equipped, educated, empowered.

It’s not that I’ve conquered Resistance or even that I’ve stopped resisting it.

I’ve discovered that Resistance is FERTILE.

The woman I am now  knows that Resistance is simply a road sign to where she needs to go, a flashy distracting billboard that says,

“Here’s your inspiration. Here’s what matters. Here’s your UNcomfort Zone.

Go THAT Way Instead.”

The woman I am now is not afraid to be uncomfortable if it leads to growth.

The woman I am now is disciplined, determined and utterly delighted with herself.

It’s going to get juicy round here.