How many times do we think we ‘know better’ than those who’s success we envy?

“Well yes, I reallyreally want to be a wildly successful coach and/or get my Starfleet Commander pin for my mlm and/or lose this weight/debt/internal-baggage … but I want to do it MY way.”

How often does the need to be right override the desire to change?

I’ve been sooooo guilty of this before and I’ve come to realize that’s it’s my ego getting in the way of growth.

Now, I’m not saying that you shouldn’t do things your way, ie put your own spin on whatever it is you do … but all to often I’ve found that (metaphorically speaking) I try to reinvent the wheel before I’ve even learned to ride the bike.

A few wince-worthy examples for you …

To be clear here …. I’m absolutely not saying that you shouldn’t do things your way. After all, following your Inner GPS is the very core of my coaching philosophy and the way I live my life.

However, I believe there is great benefit to be had in diligently following proven-successful-steps before you put your own spin on it. Give what-worked-for-others a chance to work for you before you toss it or change it up.

To use a baking analogy, it’s wise to follow a recipe carefully step by step the first time through, so you get the mouth-watering result you’re after. THEN you can add/substitute ingredients + tweak it to your heart’s content. That’s how you create your signature dish … by building on the expertise of others.. 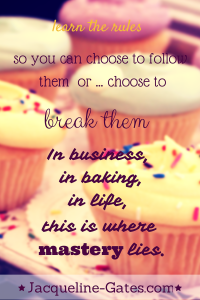 It works for other activities too …

“Writing has laws of perspective, of light and shade just as painting does, or music. If you are born knowing them, fine. If not, learn them. Then rearrange the rules to suit yourself.” ~ Truman Capote

Brilliant copywriters know this. Intentionally breaking the rules of grammar/spelling/sentence-structure has a very different effect on the reader than doing so out of sloppiness or ignorance.

When I take on a new coaching client, we almost always have to discuss this principle.

I’ll offer what has worked for me + worked for others + what I’ve studied + what I’ve experienced. I’ll invite them to try it without judgement for a set time. This is what we call on stage, a willing suspension of disbelief. Try it first … wholeheartedly and intentionally … and then we’ll adjust.

When you’re dying to change, dying to get unstuck,
determinedly searching for a way to that dream you’ve been dreaming,
then
for a while,
you’re going to have to suspend your doubts and do as you’re told.

Follow the path laid out by those who’ve done what you want to do, by the leader you’ve chosen.

Carry out the instructions of the coach you’ve hired.

Do not dismiss anything as unsuccessful
until you’ve given it your all.

After all, what you’ve been doing so far has gotten you to where you are now, so what’s the point of continuing with that if you yearn for change + growth?

(uh, ever heard of Einstein’s definition of insanity?)

Give up the need to be right
and be curious + experimental + coachable instead.

“Rules are important, but they’re temporary and they’re always supposed to be changed.” ~ John Lydon

Learn the rules so you can choose to follow them … or choose to break them.

In business, in baking, in life … this is where mastery lies.

To your self-made success,

Disclaimer:
Sweetheart, obviously this is not a permission slip to go slavishly following every self-toting guru you run across who triggers you into feeling useless without them! You’re smarter than that, right?

Do your due diligence.
Study their track record.
Make sure that they are creating the kind of life that you desire for yourself.

And when you find them, befriend them, follow them, hire them.

Learn all you can … and then add your own twist/flair/YOUness.

Standing on the shoulders of others helps you reach higher, sooner.

“The fastest way to succeed is to look as if you’re playing by somebody else’s rules, while quietly playing by your own.” ~ Michael Korda