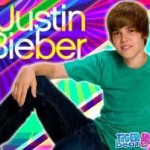 I have to admit from the start that I actually had only heard OF this young man before writing this post, and now, having heard a few of his songs on YouTube, I have to say … with as much grace as possible … that I think you need to be between twelve and twenty to really appreciate his voice.

The boy has over 10 million followers on Twitter (Oprah “only” has 6 million);

he has 550 million views for just one of his songs on YouTube and just over 1.2 million subscribers;

and I read somewhere that last year 51% of the music sold was his.

This is incredible for a 17 year old kid who started by putting his stuff on YouTube!!

As I discussed on my wildly popular post on Lady Gaga, there’s always a back-story to what looks like an overnight success, and the more I read, the more I realized that there are a multitude of marketing lessons to be learned from Justin Biebers’s rise to hysteria-producing fame.

Lesson # 1 ~ Believe in Your Gift and Work Your Arse Off

Every single one of us has something to bring to the world, but let’s face it, good singers are a dime a dozen. The ones that become stars are the ones who spend countless hours honing their skills and working day in and day out to create an audience for themselves.

This is what sets Justin Bieber apart from millions of other cute boys with good voices. From the age of 12, he was putting shaky homemade videos on YouTube of himself singing covers of famous songs.  He worked diligently to get views and subscribers.

One comment I read on his channel reminisced about when he would leave a comment on a new channel saying, “Hi, I just made a new video and I’d love you to hear me sing. Peace, Justin.”

Here’s what you can take from this, scrumptious one ~

Do something every day to improve your skill, craft your story, focus your message.

Systematically work ways to get your information in front of more people.

“Identify a way to exploit your talent and get to work.
All the planning in the world is no good if you don’t follow through. Become a robotic action-taker.

You only get paid for done.” ~ Craig Ballantyne

Lesson # 2 ~ Surround Yourself With People Who Celebrate You

You can’t go it alone.

The family-type atmosphere of the management team around Justin Bieber has been remarked upon often, but in the beginning it was just his mom, and the fans he was creating through YouTube.

If you’re going to succeed in this game, you need to be part of a community that celebrates and supports you, but still has the gumption and bittersweet kindness to tell you when you’re screwing up, or skiving off.

That being said, this goddess has little patience with those who say they can’t do such and such because their spouse/family doesn’t support them.

This is YOUR life, darling heart, and a little familial discomfort is a lot better than the soul-killing regret of unrealized dreams.

Justin Bieber will only be cute for so long ~ and his work ethic shows that he understands that. He knows that this kind of opportunity  will probably not happen again. He has a chance to do something really special, and that’s the reason he’s willing to work so hard.

As marketers, the really big, change-your-world-overnight opportunities arrive more often than the chance for pop superstardom, fortunately, but so often we miss them because we unprepared or looking the other way.

When you have the chance to get coaching from a master, speak up and go for it.

While everyone else is goofing off for summer, plan and prepare for that moment in early fall when the masses realize that Christmas is coming and they’d better earn some money and buy some gifts.(Hint – that’s a seasonal window of opportunity that all too few take advantage of!)

Don’t let fear or insecurity stop you. The world is waiting for you to be a hero, and that will only happen if you grab the chances you’re given.

Justin Bieber was born to a single mom, in a tiny town where most kids went to work in one of the big factories. His dad left before he was one year old. He had every excuse in the book as to why he couldn’t succeed ~ if he’d wanted to use them.

It was his choice ~ just like it’s my choice and your choice ~ to dream of something better, to take our gifts and maximize them, and to take action every day, to strain our potential till it cries for mercy.

You and I may never have millions of Twitter followers, or get to spend 48 hours with P Diddy, or a movie made about our lives, but we can have the freedom and security we yearn for.

You only get paid for done.

the goddess known as Jacqui

PS: Do pass this on, won’t you? And there’s that lovely new Google +1 button for you to vote on too.

I’d so appreciate it!

And if you’re new here ~ do opt-in on those little boxes beneath the interview video so we can keep in touch.