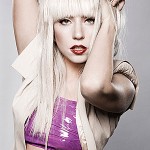 Ok, I have to admit it, as odd as it might be coming from a 50-something ex-opera singer, I am gaga for Lady Gaga!

Not so much her music ~ although her lyrics are resolutely uplifting and an anthem for misfits everywhere ~ but it’s the woman herself. She is the sheer embodiment of every precept of marketing and self-development training I have ever read.

Although I’d heard of Gaga – and seriously, dahling, how could one not? The woman is everywhere! –  it wasn’t until I saw Anderson Cooper’s interview with her that I really began to take note of the lessons lurking behind her success.

So let’s answer the title question from a marketing perspective, shall we?

She is a living, breathing, jaw-dropping example of the Power of Self-Labeling.
(It’s what I teach – How could I not love that!)

In the interview, Cooper says –

“She talked a lot about how taking the name “Lady Gaga” kind of allowed her to free herself of insecurities and transform herself into the superstar that she felt she was always meant to be.”

There it is! **goddess happy dance **

The bestest ever proof that Choosing Your Label/Title is pivotal in creating the kind of life you want.

Consummate wordsmith that she is, the originally named Stefani Joanne Angelina Germanotta chose ‘Lady’ to give her instant implied status and a cheeky nod to the powdered wigs and Marie Antoinette-esque costuming she prefers, although I have to admit there’s nothing at all ladylike about the language she’s been known to use!

However, the much publicized profanity also adds to the complexity and sheer authenticity of her branding ~ and the unpredictability makes her a media darling, although I wouldn’t recommend it at your local opportunity meeting.

The French word ‘Gaga’ means to be utterly enthralled by something, excited to the point of madness, and although she says she was originally inspired by the Queen hit “Radio Gaga”, (and the exuberant exhibitionism of Freddie Mercury) when you look at the relationship she has with her fans, the choice of her title is sublimely apt.

**Disclaimer ~ there are many stories about how Gaga chose her name, these are the ones I’ve found most corroborated. But it really doesn’t matter. Gaga knows, you can’t build a legend without myth.

Speaking of her fans,  ~ there is nothing that shows the intuitive genius of Gaga’s marketing mind than her relationship with the growing legion of what she calls her  ‘Little Monsters’.

And this brings me to my second point –

Lady Gaga has a Deeply Intimate Knowledge of Her ‘Market’

In an article in Oprah magazine, Gaga relates how, when leaving a show one night, she saw hundreds of her fans standing in the pouring rain, just hoping to catch a glimpse of her. Without any hesitation, barefoot and makeup streaming, she went into the rain to talk to them and sign autographs.

She said, “All the time I was thinking, what can I do for you? How can I help you? What can I say in my music that makes you love yourself more?”

She understands them. She knows how they think, what they yearn for. The things they hide and the things they cry over. She knows what’s important to them and which sacred cows to slaughter in public to bring awareness to those things.

Believe me, marketers, if we thought about our prospects that intensely, and focused on what They want/need/desire (as opposed to what we want to give (sell) them), we would develop a following as loyal and ‘rabid’ as hers. 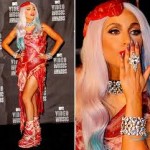 Seriously, the girl is insanely courageous in every single aspect of her career. Whether she’s attacking Senators about the ‘Don’t Ask, Don’t Tell’ law, or wearing a dress made of meat to draw attention to the horrors of the food industry, she shows no fear of embarrassment, ridicule or failure.

She understands intuitively that if you cannot be seen, you cannot have an impact, and she’ll do whatever it takes to create an effect.

“In an interview last winter, Lady Gaga recalled her anguish at being ignored as she performed at a bar filled with drunken NYU students. No one paid the slightest attention to her until, fed up, she decided to strip down to her lingerie. “I started playing in my underwear at the piano and I remember everyone was all of a sudden like ‘Whoa!’ And I said, ‘Yeah, you’re looking at me now, huh?’ ” ~ Forbes magazine article

Again, this is not something I’d recommend you do at your next convention, but it does give rise to the question of how much you’ve been held back in your marketing by the Fear of Being Noticed.

And finally, Lady Gaga Works Her Arse Off!

From the time she was a kid playing Beethoven and getting straight A’s, Gaga has applied every last ounce of energy to the realization of her dream. She’s been on tour for nearly three years straight, written, performed and released three Top 10 albums, done countless interviews and still manages to micro-manage every aspect of her image and career.

This is the difference between having a Job and a having a Mission.

So, would you’d like to add a touch of Lady Gaga magic to your life?

But, scrumptious ones, I cannot possibly leave you without a small caution.

Become what Joe Schroeder calls ‘a Walking Reward’, and you won’t go wrong.

Toot your own horn just to make money ~ and when all eyes turn on you, you will be found to be lacking.

Because, as she reminded herself in an interview,

” ‘Now that you have everybody watching, Lady Gaga, you’d better be f***ing great.’ “

Dahlings, I’d be so thrilled if you liked this enough to pass it on to friends.

Use the FB share or Twitter button, and don’t forget to Opt-In so you don’t miss any further deliciousness.