The more I dive into the backstage (aka research) work of Intentional Nesting, of how your home is the “set-design” part of acting-as-if, the more I realize that there’s a vital piece left out of most books and magazines and teachings on decluttering.

They focus only on the DOing not the Being.

Unless you get really clear on who you were when you accumulated all that stuff, and who are you going to be without it, the changes you make won’t stick.

They have nothing to stick to.

A lot of people find the idea of being without that stuff terrifying.

Yes, they may get all excited and enthusiastically jump into a major Marie-Kondo-type purge, but then halfway through, they realize they don’t know who they’re going to be without that stuff.

So they stop decluttering  and start accumulating again, because they have to go back to who they were with that stuff because that’s who they know. That’s the identity they’re clearest on and most comfortable as.

The identity part of any desired change is something that has to be navigated. 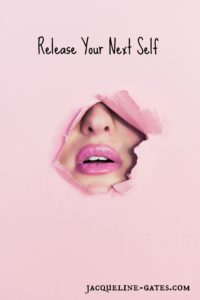 Successful, life-changing decluttering is done with an eye to who you’re going to be when your space looks like you want it to, because, chances are,you already are that person on the inside and what you’re feeling is the urge to get your outsides to mirror your insides.

However, if you don’t shift into who you are going to be, soon enough, your outsides will pull you back into who you used to be.

There is always a mirroring going on. Your outsides always reflect your insides or else your insides are trying very hard to be reflected on the outsides.

If that’s not happening, we get stressed and miserable and unhappy with life. It is because of that disconnect.

This is the precept upon which Intentional Nesting is built.

When there’s a disconnect between our insides and our outsides, we suffer and we try to get that alignment working.

We try by reading a book on decluttering and attacking a closet and emptying it all out onto our bed, and then we lose track of that Becoming that we were aiming for because we don’t have the tools to anchor that becoming beforehand.

This is not a decluttering problem.
It’s an identity problem.

Intentional Nesting is based on acting skills, ie ability to become who you want to be in every facet of your desired life – set design (aka your environment), your words, your wardrobe, your body posture, the music you listen to.

Knowing who you’re aiming to BE Next helps and supports decluttering in all kinds of very important ways:

The self-directed part is key –

You’re no longer doing this work to “follow Marie Kondo” or to duplicate some Pinterest picture you love.

Instead, you’re doing what Michaelangelo did with the gigantic blocks of marble from which he created breathtaking art …

“I saw the angel in the marble and carved till I set him free.”

Photo by ian dooley on Unsplash