When I was little, my mom was very fond of saying things like “I know you want that, but don’t get your hopes up.”

I know it was because she loved me, because she wanted to protect me from the pain of disappointment and unrealized dreams.

But now I know ~ my mother was wrong.

Because when you have little dreams, even if you achieve them, you don’t amount to much.

Nobody creates anything Huge and Earth-shattering by having small thoughts. Wanting something that’s just outside of your current reality won’t stretch you very far – and more often than not, you won’t even bother to reach for it.

“If you know what to do to reach your goal, it’s not a big enough goal.” ~ Bob Proctor 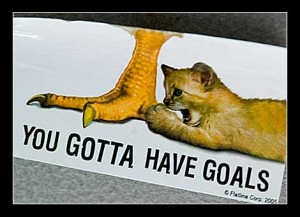 So, against my mother’s wishes, I’m going to dream Big!

I’m creating Huge, Luscious Visions of Torrential Income Streams; World Wide name recognition and the kind of travel schedule that makes my passport look like a copy of War and Peace!

Because, as Les Brown says :-
“Shoot for the moon. Even if you miss, you’ll land among the stars.”